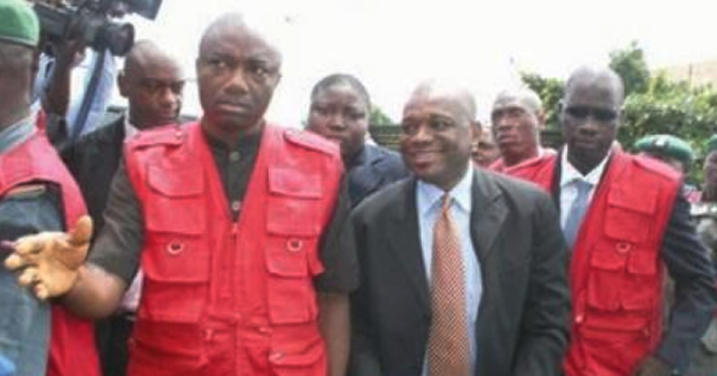 A former Abia State Governor, Orji Uzor Kalu, has been identified as the sponsor of a news report in which a non-existent University of Ibadan Professor, Yemi Adetunmbi, attacked Rotimi Jacobs, counsel to the Economic and Financial Crimes Commission during his (Kalu’s) N7.1billion fraud trial.

The fictitious Adetunmbi, who claimed to be Professor of Law at the University of Ibadan, had in the report said Jacobs lacked the professional ethics and decorum to represent any responsible government.

The fake UI professor was quoted as saying,

Some days ago, July 2, specifically while waiting for my friend’s case in Court 5, Federal High Court here in Abuja, the case between Federal Government and Orji Uzor Kalu was fortunately and unfortunately mentioned before ours and I had the opportunity to observe and listen to the case.

The reality today is that our judicial system is going down a wrong path. Some government-paid lawyers are not supporting these judges to carry out their roles effectively and judiciously. They are beginning to play gods and their activities and arrogance will one day set the system on fire. May that day never come when a judge will be discharging the duty of his professional calling under fear, threat, harassment and intimidation on the basis of the body language of the government. If you were in that court, you would pity Justice Inyang Ekwo.

Rotimi Jacobs was practically intimidating and arrogantly embarrassing a whole high court judge. That Jacobs is representing the federal government in a case does not give him the impetus to utter rubbish to the judge. What would such a lawyer teach young lawyers? You stand up to a judge and dictate to him how a case he is presiding over should be handled? You threaten him with harsh words if he fails to consider the federal government’s expectations? That’s a big foul. And tomorrow if the judge stands his ground, you rattle up corruption charges against him. So how do you want the judiciary to do well?

Findings by Flavision, however, showed that there is no professor of law known as Yemi Adetunmbi in the University of Ibadan.

pervert the course of justice.

This story was sponsored by Kalu, a coward who could not insert his name in the publication but rather used non-existent Professor Adetunmbi, the alleged Professor of Law in U.I,

I graduated from U.I. and I remained an alumnus of the University. So, there is no Professor of Law known by that name in UI. The story was first published three weeks ago at Aba but recirculated with news vigor today. The senior lawyer was never rude to Hon. Justice Eko as falsely claimed.

Recall that Kalu, a senator representing Abia North, is seeking an order of the court prohibiting the EFCC from retrying him on the alleged N7.1 billion money laundering charge against him.

He contended that having been tried once by EFCC, convicted and sentenced in the same charge, FHC/ABJ/CR/56/ 2007, it would amount to double jeopardy for him to be subjected to a fresh trial on the same charge.

The former governor had also applied for an order prohibiting the EFCC from retrying, harassing and intimidating him with respect to the said charge or any other charge based on the same facts as he need not suffer double jeopardy.

Kalu was earlier found guilty and handed a 12-year jail term by the Lagos Division of the court.

The trial court convicted the former governor alongside his firm, Slok Nigeria Limited and a former Director of Finance in Abia State, Jones Udeogu, for alleged N7.1 billion fraud from the state treasury.

However, the Supreme Court, in its judgment on May 8, quashed the conviction and ordered a retrial of the defendants by the EFCC.

In a unanimous decision by a seven-member panel of Justices, the Supreme Court nullified the entire proceedings that led to Kalu’s conviction, stressing that the trial judge, Justice Mohammed Idris, was already elevated to the Court of Appeal, as at the time he sat and delivered a judgment against the defendants.

It noted that Justice Idris was no longer a judge of the Federal High Court as of December 5, 2019, the day the former governor and his co-defendants were found guilty of the money laundering charge against them.

According to the Supreme Court, Justice Idris, having been elevated to the Court of Appeal before then, lacked the powers to return to sit as a High Court Judge.