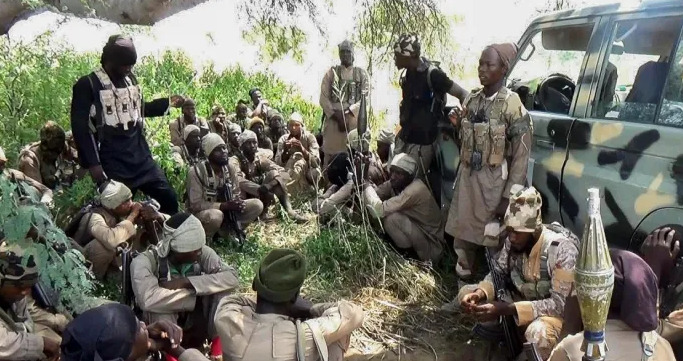 A research paper prepared for the European Peace Facility (EPF), a European Union project for peace support operations across the globe, has revealed that terrorist groups, Boko Haram and the Islamic State for West African Province (ISWAP), had launched 500 attacks on military bases and formations of the Multi-national Joint Task Force (MNJTF) between 2015 and 2020.

The paper presented by a Researcher and Director, S4 Initiative (Safeguarding Security Sector Stockpiles) based in Borex, Switzerland, Mr Eric Berman, titled: “The Management of Lethal Materiel in Conflict Settings: Existing Challenges and Opportunities for the European Peace Facility”, said lethal weapons including small and light arms seized from the military bases during attacks by terrorists, sustained the 12-year insurgency in Nigeria and the Lake Chad region.

While the report cited corruption and diminished morale as being largely responsible for loss of equipment, the Defence Headquarters (DHQ) has however said the Armed Forces of Nigeria were winning the war against insurgency in all the theatres of operations, including the North East and the North West regions of the country.

Defence Spokesman, Maj. Gen. Olufemi Sawyerr, said the fact that thousands of insurgents were surrendering with their families and laying down their arms, was an indication that government was winning the war against insurgency, adding that the act of surrender wasalso a sign of victory for the nation.

stressing also that the insurgents launched 500 attacks on MNJTF bases within a six-year period, where no fewer than 2,368 military personnel were killed.

A breakdown of the figure showed that Nigeria recorded 1,952 fatalities while Chad recorded 217; Niger, 132 and Cameroon 67.

As alarming as these numbers are, they likely under-estimate the true scale and scope of the losses incurred concerning the security personnel of the four Lake Chad Basin countries.

A memorial to fallen comrades since 2013 at the headquarters of the Nigerian military’s operations in Northeast Nigeria had in 2018 listed the names of more than 1,300 soldiers inscribed on it,

An estimated 600 soldiers lost their lives in attacks by Boko Haram and died within a six month period in 2018 alone,

More than 100 Cameroonian soldiers lost their lives in attacks by Boko Haram in 2014 and 2015, even as three separate attacks on police targets in N’Djamena in June 2015, resulted in more than 100 casualties, including dozens of deaths, many of whom were members of the police.

The report also detailed reasons why weapons are lost to insurgents.

The loss of materiel as a direct consequence of these attacks is substantial. A gun truck, fitted with a machine gun will frequently transport several tins of linked cartridges totalling hundreds of rounds of ammunition. Sometimes substantial quantities of weaponry kept at the base as reserves can be taken from military positions the insurgents had themselves attacked.

When a base is overrun, crew-served weaponry such as machine guns, mortars and towed artillery

yet, a lot of that materiel is in good enough condition to be of use to the militants,

The research paper also cited as reasons for the loss of personnel and materiel,

and ammunition, as well as

tanks only firing twice, armoured personnel carriers running for 10 to 15 from boots to tanks,

and has compiled a number of soldiers’ grievances about insufficient body armour minutes before overheating, machine guns jamming, and mortar shells failing to detonate.

These long-standing issue summarises the scope of the problem in Nigeria, ranging concerns are not based on anecdotal accounts. They are systemic,

Berman, also citing research works, said, “Corruption goes a long way to explaining why equipment is lacking. It is endemic within Nigerian society to implicitly accuse the military of purposely prolonging the conflict for their own ends and current President Muhammadu Buhari, acknowledged this, pledging to counter it as a central part against entrenched corruption within the military, ranging from extortion at checkpoints of his first presidential campaign in 2015.

But the challenge facing the country is enormous and progress has been slow and uneven. Malfeasance within the defence sector is by no means limited to Nigeria. It is a problem throughout much of the world, including elsewhere in the sub-region,

The report also found that the regional response to the “Boko Haram” conflict underscored both the need for EU support—for example through the provision of lethal materiel and training via European Peace Facility (EPF) and the assessment of risks inherent in any kind of engagement.

The levels of loss of uniformed personnel and lethal materiel from state stockpiles in the Lake Chad region are astonishingly high. In six years (between 2015 and 2020) several times as many uniformed personnel serving in and alongside the Multinational Joint Task Force were killed due to ‘malicious acts’ than those, who have served in UN peacekeeping operations over a span of more than 70 years.

Reporting suggests that Boko Haram factions have seized Contingent-owned Equipment (COE) that includes a wide-range of heavy weapon systems. Some of the armoured vehicles and towed artillery lost to Boko Haram originated from EU member states. The quantity of small arms and light weapons—many of which also were manufactured in the EU—is so great that it has sustained the insurgency for over a decade,

The report, therefore, recommended EU’s further engagement with the African Union (AU) and the ECOWAS in addressing issues raised by the report.

These notwithstanding, Maj. Gen Sawyerr, the defence spokesman, who was not comfortable with the report, told THISDAY that the Armed Forces of Nigeria were winning the war against insurgency and armed banditry.

MNJTF’s Director of Public Communication, Col Muhammed Dole, was yet to respond to questions about the report billed for presentation today as at the time of filling this report.